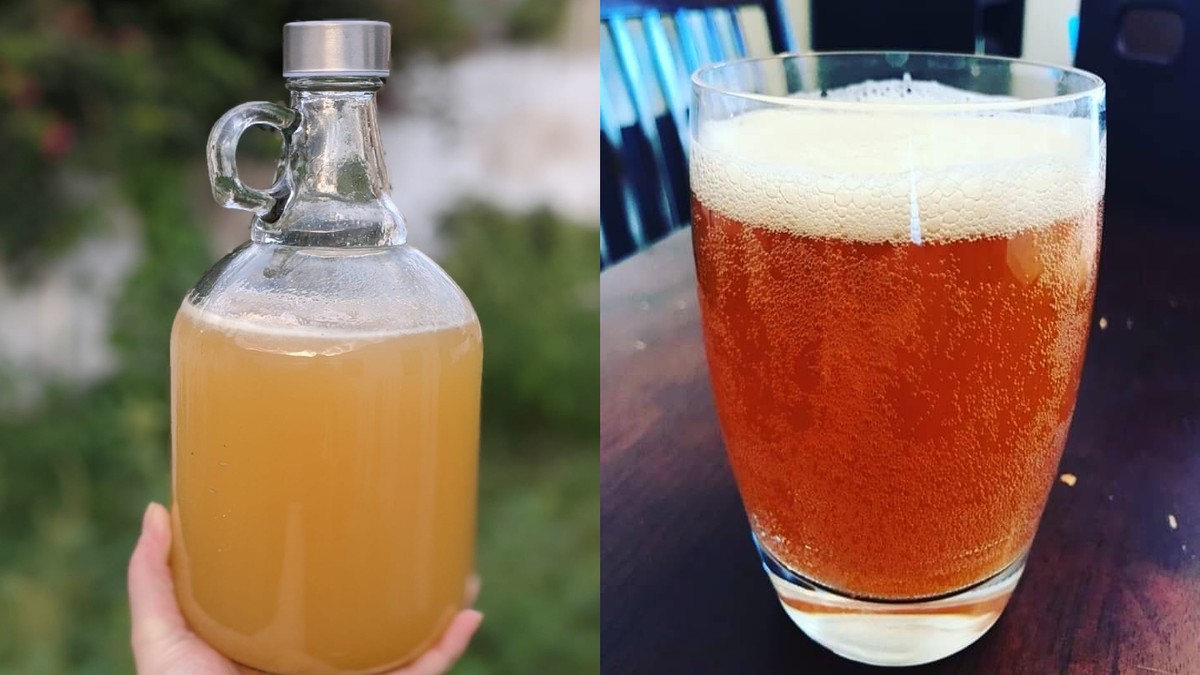 For some, remembering the early days of the COVID-19 pandemic is reminiscent of the dense and rich smells of sourdough bread and kimchi. With free time and nowhere but at home, the quarantined masses of the world have turned to fermentation.

One cook whose interest predates the pandemic is Florencia Juárez Marrades, a 26-year-old Argentinian expert in what is called ancestral cuisine. She is dedicated to making alcohol from scratch in the most natural way possible, using ancient methods and techniques – and this is very old: archaeological records show the Egyptians started using malt and yeast to make beer and bread around 4000 BC.

Juárez’s interest in the old ways of alcoholism was awakened during a trip to Scotland and Ireland a few years ago. Photo: Florencia Juárez

Juárez and his partner, Nelson Ortega, want to modernize the ancestral. “We have given new life to flavors left out,” she says. Alcohol holds a prominent place in the courses given by Juárez and Ortega, with ancestral beers as a specialty. What differentiates a so-called ancestral beer from your standard pint of lager is the yeast. “We only use wild yeast, grown from ingredients that you have in the house,” says Juárez.

Alcoholic fermentation is a chemical process in which yeast, a type of fungus, converts sugars into a new substance, alcohol. While virtually all yeasts are edible, not all are effective in making drinkable beer. “Some dogs are bloodhounds, others are guard dogs. The yeasts are just as diverse, ”says Juárez. “If we are to ferment alcohol, the type of yeast used has to be the one that thrives in very sweet environments.”

Tons of food can be fermented and turned into alcohol, but beer has traditionally been made from fermented grains. “I can make a beer with rice, wheat and quinoa,” Juárez said.. As long as you have a grain element, a sugar element, and a fermentation element, you have beer.

But making ancestral beer requires a deep understanding of how best to use the myriad of wild yeasts available to us, which means it’s best left to the professionals. Instead, you can try making your own mead – a close relative of honey-based beer – at home. To that end, Juárez has provided an easy-to-follow recipe for your own Viking-approved homebrew.

In a large, wide-necked glass jar, dilute the honey and water. Cover with a cloth or towel, without closing it tightly. As the days go by, you will start to see bubbles emerge. Continue to swirl and oxygenate the drink twice a day, every day.

With this initial fermentation, you want air to come in every day so that the yeasts in the honey – which will later create the alcohol – will start to multiply. Between day 12 and day 15, the honey water will already smell of alcohol. and you should try it to verify that it becomes less sweet.

Brewed this long, it tends to concentrate at around 4% blood alcohol, which means it’s about as potent as a standard session beer. Juárez says that if you want a more accurate metric for this step and the next, it’s worth investing in a hydrometer, which is a cheap kit that gives brewers insight into how much sugar is in their drink. been turned into alcohol.

If you want a drink with a little more oomph, you’ll have to wait a bit. Bottle it with an airlock and let it ferment without oxygen for three months to a year. This step is called the second fermentation, this is where the alcohol percentage increases. That’s it – in a few months you will have something to show off at the next Ancient Greek dinner you are invited to.

One of the other immediate differences between ancestral beers and the six pilsner pack you would buy unlicensed is the pasteurization process. Commercially brewed beer needs to be as clean as possible to be produced on a large scale and distributed around the world. That’s why brewers tend to run their finished bottled or canned products under jets of hot water, a process that kills bacteria and prevents yeast growth.

Juárez says that when it comes to the beer she and Ortega specialize in, pasteurization isn’t entirely necessary. She says the wild yeasts used by the couple are “resistant to contamination”, as opposed to the yeasts used in commerce, which are sensitive to it.

Researchers are not entirely clear on this, however, as our scientific knowledge about fermenting wild yeasts is currently very limited. According to a 2014 study, the wild yeasts encountered in spontaneous fermentation are “generally harmless”, but some can produce “potentially harmful compounds”, in particular neurotoxins, substances which can damage the nervous system.

In the meantime, other artisans from all over the world have started the trend, trying to bring back old recipes that skip the pasteurization process. They believe that throughout history humans have been exposed to all manner of bacteria and that our recent goal of eliminating all microorganisms from our food could damage our immune system.

Just like without pesticides, more trendy than you natural wine, unpasteurized or raw beer has now taken over the trendy bars near you. Raw beer is safe, as long as it is continuously refrigerated and consumed shortly after manufacture. The raw properties of beers like this mean that even though they can be packaged, they have a limited shelf life compared to mass-produced drinks.

This is one of the reasons why, so far, no one has succeeded in mastering the production of ancestral beers on a large scale. Speaking to Juárez, you get the impression that, for her at least, this is where the beauty of beer lies. “If you want to sell something on a large scale, you have to have a standard flavor that is reproducible from bottle to bottle,” she says. “Whereas with a wild beer, there are never two the same.”

Hoop & Horn Mead arrives in Shanghai – This is Shanghai